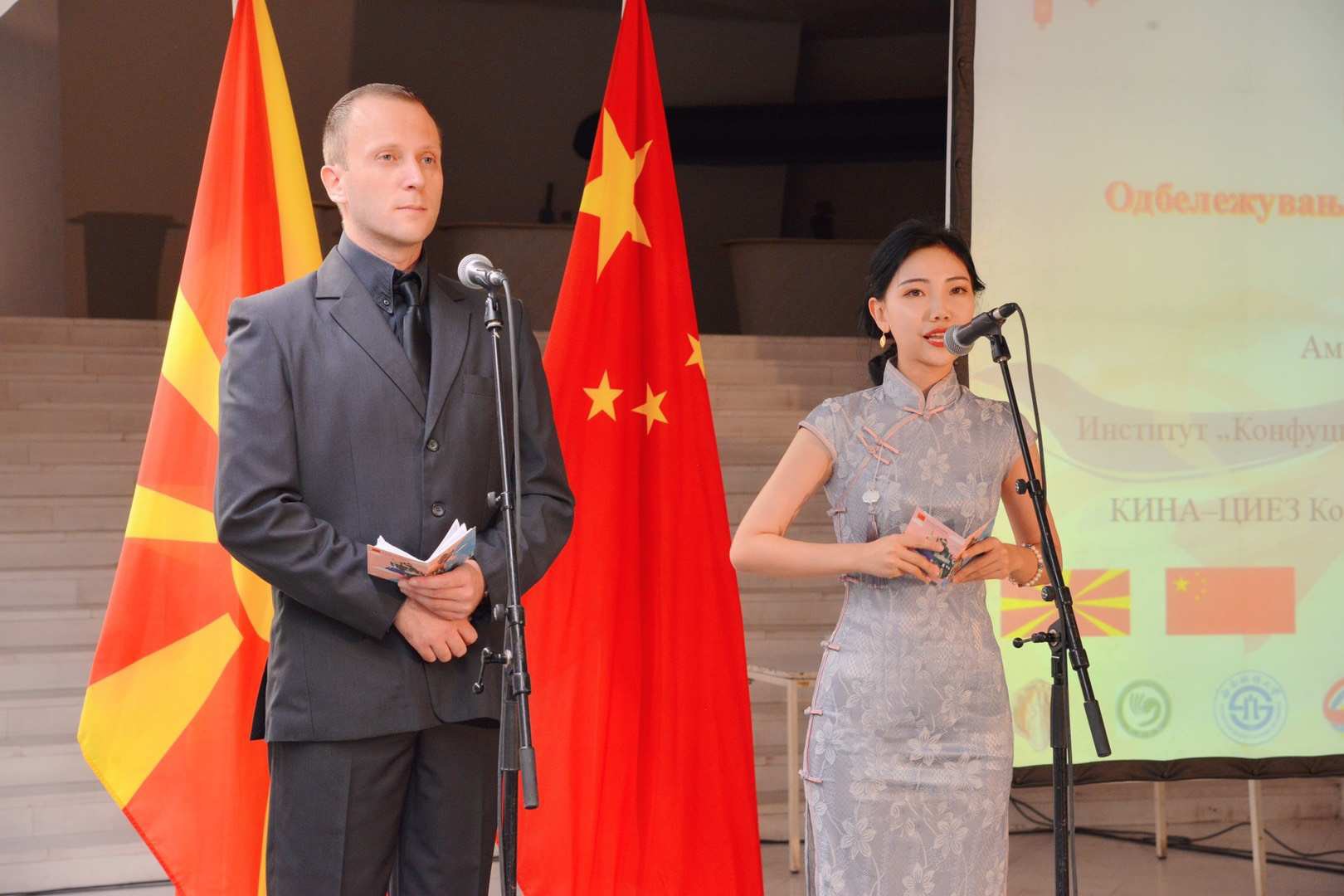 The event began at 7 pm and marked the first public speaking engagement for the newly arrived ambassador of the People’s Republic of China in North Macedonia H.E. Zhang Zuo. He addressed the audience with warm greeting and expressed joy that he is in North Macedonia. H.E. Zhang Zuo emphasized China’s achievements in infrastructure construction and the cooperation with North Macedonia in that area. He further highly praised the work of the Confucius Institute at Ss. Cyril and the Methodius University, and stressed how overseas Chinese and their local friends have made outstanding contributions to the cultural exchanges and cooperation between the two countries. Ambassador Zhang Zuo said that the Embassy will continue to support the cooperation and friendship between China and North Macedonia, especially strengthening the communication and coordination with the Ss. Cyril and Methodius University in Skopje and the China-CEEC Coordination Center for Cultural Cooperation. 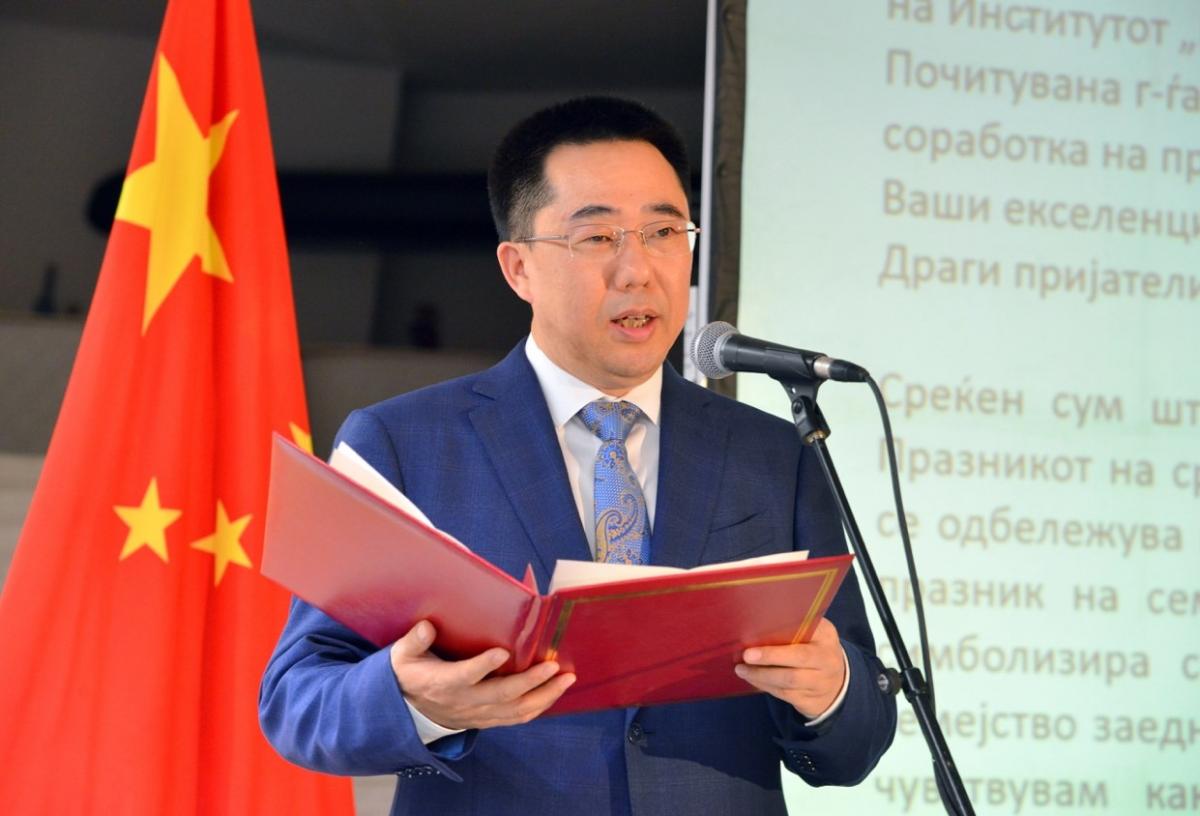 Prof. Nikola Jankulovski, Rector of Ss. Cyril and the Methodius University, in his speech welcomed H.E. Zhang and wished him a successful tenure in North Macedonia. He said that the three-party joint celebration of the Mid-Autumn Festival proves the strong friendship between our two countries and their respect for each other’s cultural traditions, fully affirming Confucius Institute’s role as a cultural exchanges bridge between the two countries. For six years, the Confucius Institute has made significant contributions to the promotion of cultural and academic exchanges between the two countries. 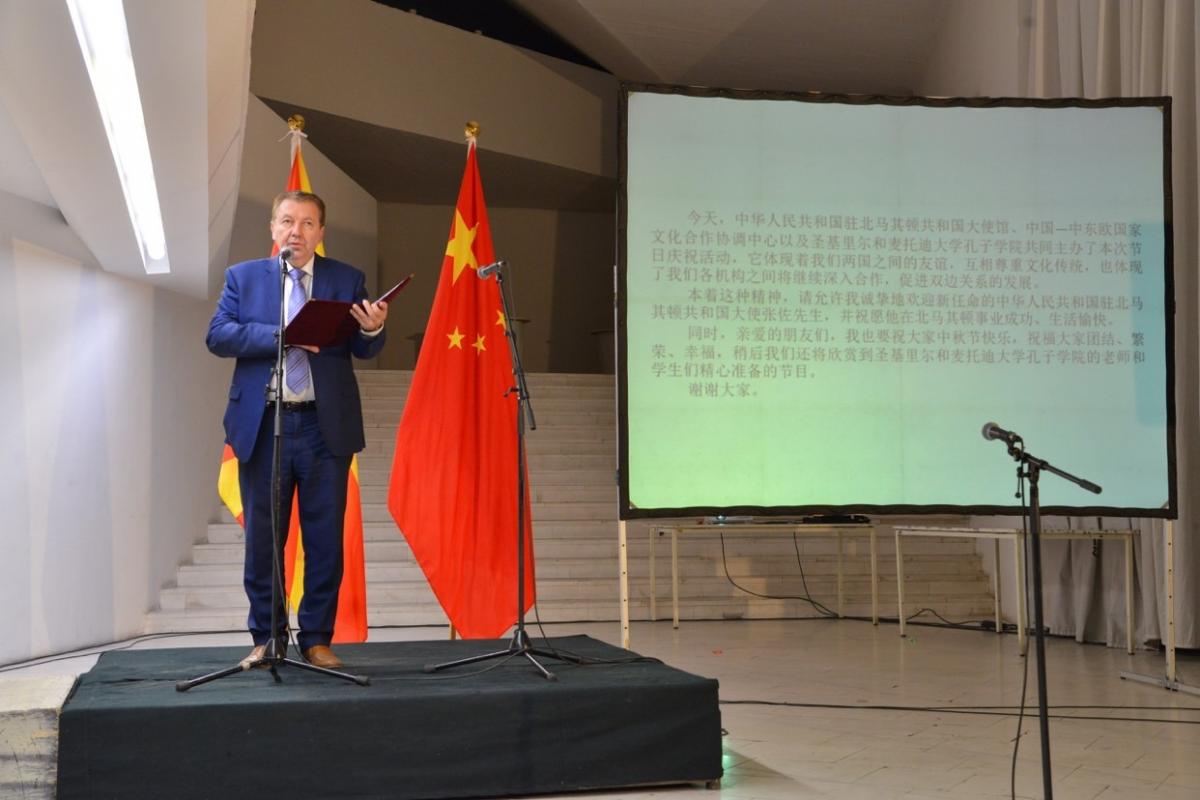 Liao Wei, the Chinese Director of the Confucius Institute at Ss. Cyril and the Methodius University, and Vlatko Stoilkov, the Macedonian Director, introduced the origins, traditions and celebrations customs of the Mid-Autumn Festival and wished the guests a happy festival.

The speeches were followed by performances prepared by Confucius Institute’s teachers and students. The youngest students sang the Chinese songs “Jasmine”, “Little Sister” and “Little White Rabbit”, followed by a vocal performance accompanied by the rhythmic sound of kuai ban bamboo clappers (ancient Chinese “rap” music). Their performance won a big applause from the audience.  Teachers and students dressed in qipao, also known as cheongsam (Chinese traditional form fitting woman’s dress), performed the dance “Mid-Autumn Festival Love Story”. Based on an ancient story about two star-crossed lovers meeting under the Mid-Autumn Festival’s full moon and then reuniting on the festival the following year. The music for the dance was a medley of Chinese and Macedonian melodies. The final performance featured the teachers and students wishing everyone a Happy Mid-Autumn Festival with a Song Dynasty “Ci” lyrics and tune.

After the performances, the guests enjoyed authentic Chinese cuisine and the famous moon cakes, the sweet delicacy shared with friends and family on the day of the festival. The guests mingled in a festive atmosphere browsing the poster exhibition, paper-cutting, calligraphy, painting and tea art tables all displayed in the foyer of the National Opera and Ballet. A special treat for the guests was the Skopje Astronomy Society professional telescope, which enabled them to view the full moon in all its splendor.

The event aimed to provide North Macedonia audience with a Mid-Autumn Festival experience and better understanding of Chinese culture, all the while promoting friendship between China and North Macedonia and raising Confucius Institute’s profile in the country. The Macedonian News Agency (MIA) and other media covered the event.