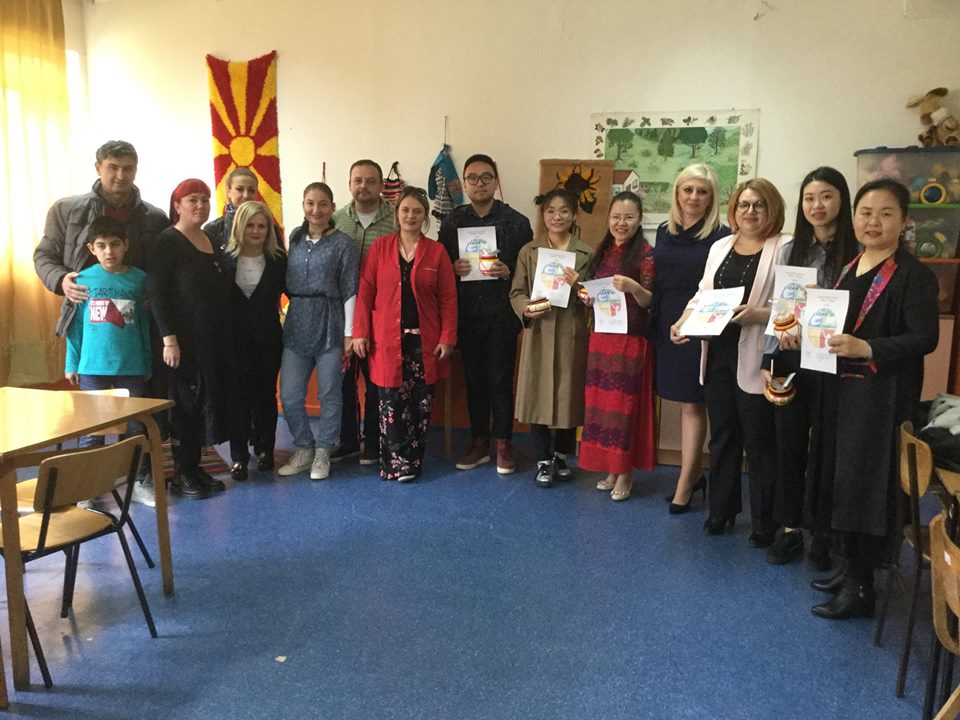 On March 31st, Ms.Elena Damjanoska and CI Chinese teachers visited the “Idnina”  Elementary School for children with special needs. At the school the CI teachers with the support of teachers from the school organized a Chinse traditional handicraft workshop for a group of students. The students welcomed this activity with warmth and enthusiasm.

This activity aimed to promote Chinese culture andengagement of children with special needs, as part of CI’s social responsibility, and effort to build a more inclusive, equal and loving world. In order to engage the students in sensory and cognitive learning, the Chines handicraft workshop included Chinese knots and paper-cuts making tutorials, that proved popular with the children. The students were divided into two groups, five to seven per group. Each group followed the tutorial of two CI teachers, supported by three Idnina School’s teachers who actively participated in the workshop.  The students learned about Chinese culture and fell under its spell, while making charming knots and paper-cuts.

Teacher Zhang Lijie, who tutored the paper-cutting group, prepared in advance Chinese zodiac animals paper-cuts and some simple symmetrical patterns for the students and teachers as templates and gifts. The students were in awe of the colorful paper-cuts, and worked hard with their little hands and scissors to make similar paper shapes. The origin story and meaning of the Chinese zodiac animals increased the interest of both students and their teachers for Chinese handicrafts and culture. Students patiently guided by both sets of teachers made their own paper-cuts and proudly showed their achievement to their fellow students and teachers.

Volunteer teacher Wu Yingjuan taught the students in the second group how to make Chinese knots. She prepared in advance the wings and eyes of the dragonfly knot, and then demonstrated how to use the flat knot to make the body of the dragonfly. The dragonfly knot, which in Chinese mythology symbolizes harmony, good luck and prosperity, made the children eager to make the knot themselves. The studentswith help from their teachers quickly mastered the flat knot making technique and even made flat knot bracelets.

”Idnina” Special Elementary School principal Ms. Loreta Andreevska, on behalf of the school expressed her sincere gratitude to our CIand presented certificates of appreciation with gifts handmade by the students to our CI representative and the CI teachers individually. After the Chinese handicraft workshop concluded the principal and teaching staff invited the CI delegation to taste delicious traditional Macedonian dishes prepared by the school’s canteen. The Ci staff were impressed with the delicious food and warm reception. Both sides expressed their willingness to strengthen communication and cooperation, promote cultural exchange and friendly relationship between China and North Macedonia.

Menciusonce said “The man of humanity loves others and he who loves others is always loved by others“. In the Chinese tradition the values of respecting the elderly, caring for the young and helping others are virtues upheld by the Confucius Institute at St. Cyril and Methodius University in Skopje. Our CI is aware of its social responsibility and strives to emulate the Confucius concept of “kindness, i.e. love of others”. Further, the CI’s role is to highlight Chinese traditional virtues,  promote the excellence of Chinese culture, establish a good image of China, promote cultural exchangeand friendship between China and North Macedonia.