Peking opera of China is a national treasure with a history of 200 years. In the 55th year of the reign of Emperor Qianlong of the Qing Dynasty(1790) ,the four big Huiban opera Troupes entered the capital and combined with Kunqu opera, Yiyang opera, Hanju opera and Luantan in Beijing’s thearetical circle of the time. Through a period of more than half a century of combination and integration of various kinds of opera there evolved the present Peking opera, the biggest kind of opera in China, whose richness of repertoire, great number of artists of performance and of audiences, and profound influence are incomparable in China.

Peking opera is a synthesis of stylized action, singing, dialogue and mime, acrobatic fighting and dancing to represent a story or depict different characters and their feelings of gladness, anger, sorrow, happiness, surprise, fear and sadness. In Peking opera there are four main types of roles: sheng (male) dan (young female), jing( painted face,male), and chou (clown, male or female). The characters may be loyal or treacherous, beautiful or ugly, good or bad, their images being vividly manifested.

The music of Peking opera is that of the “plate and cavity style”.Its melody with harmonious rhythms is graceful and pleasing to the ears. The melody may be classified into two groups: “Xipi” and “erhong”, guiding pattern, original pattern, slow pattern, quick pattern, desultary pattern being their chief patterns. The performance is accompanied by a tune played on wind instruments, percussion instruments and stringed instruments, the chief musical instruments being jinghu (a two-stringed bowed instrument with a high register), yueqin( a four-stringed plucked instrument with a full-moon-shaped sound box), Sanxian( a three-stringed plucked instrument), suona horn, flute drum, big-gong, cymbals, small-gong, etc.

The costumes in Peking opera are graceful, magnificent, elegant and brilliant, most of which are made in handicraft embroidery. As the traditional Chinese pattern are adopted, the costumes are of a high aesthetic value.

The types of facial make-ups in Peking opera are rich and various, depicting different characters and remarkable images, therefore they are highly appreciated. Moreover there are numerous fixed editions of facial make-up.Usually, red faces have positive meanings, symbolizing brave, faithful, and wise men. Another positive color is purple, which signifies wisdom and bravery. Black faces, for their part, usually have neutral meanings, symbolizing just brave men; however, they can also represent uprightness.Blue and green faces also have neutral meanings that symbolize the hero of the bush, with the former also hinting at strength and intrepidity.Yellow and white faces have negative meanings that symbolize ferocious, treacherous, and crafty men. 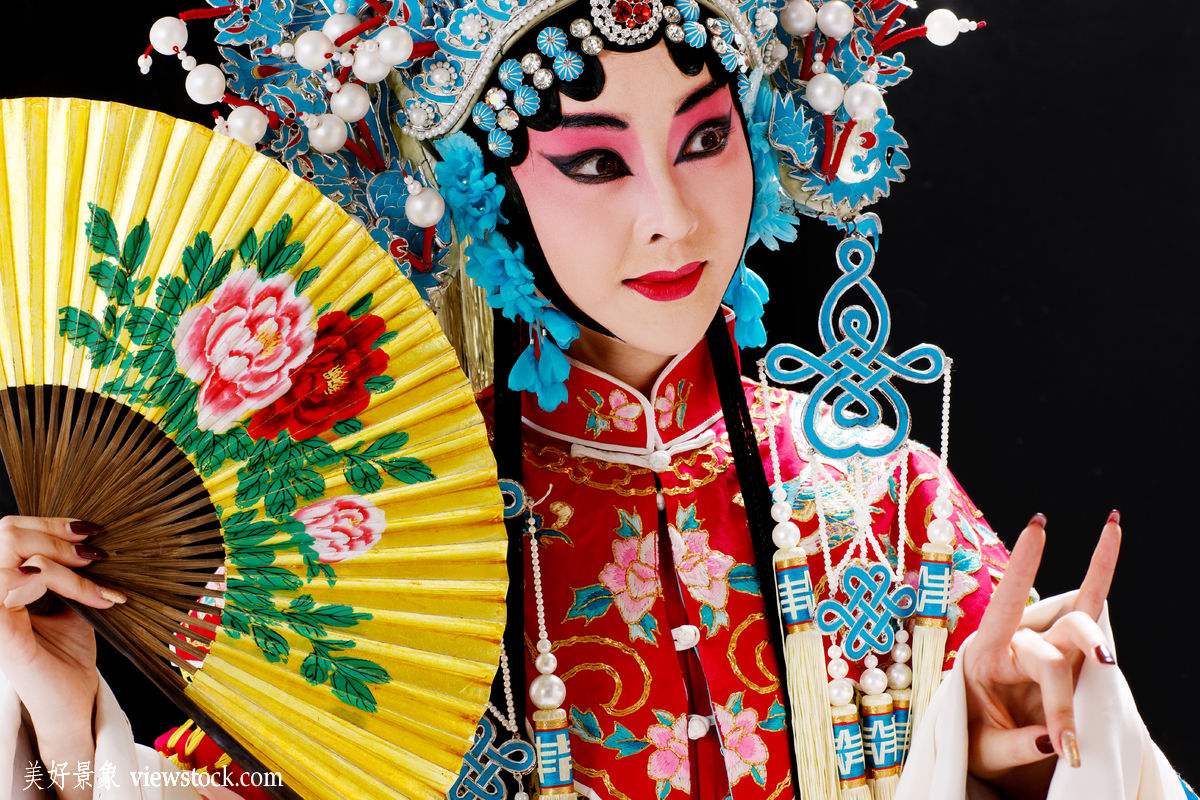 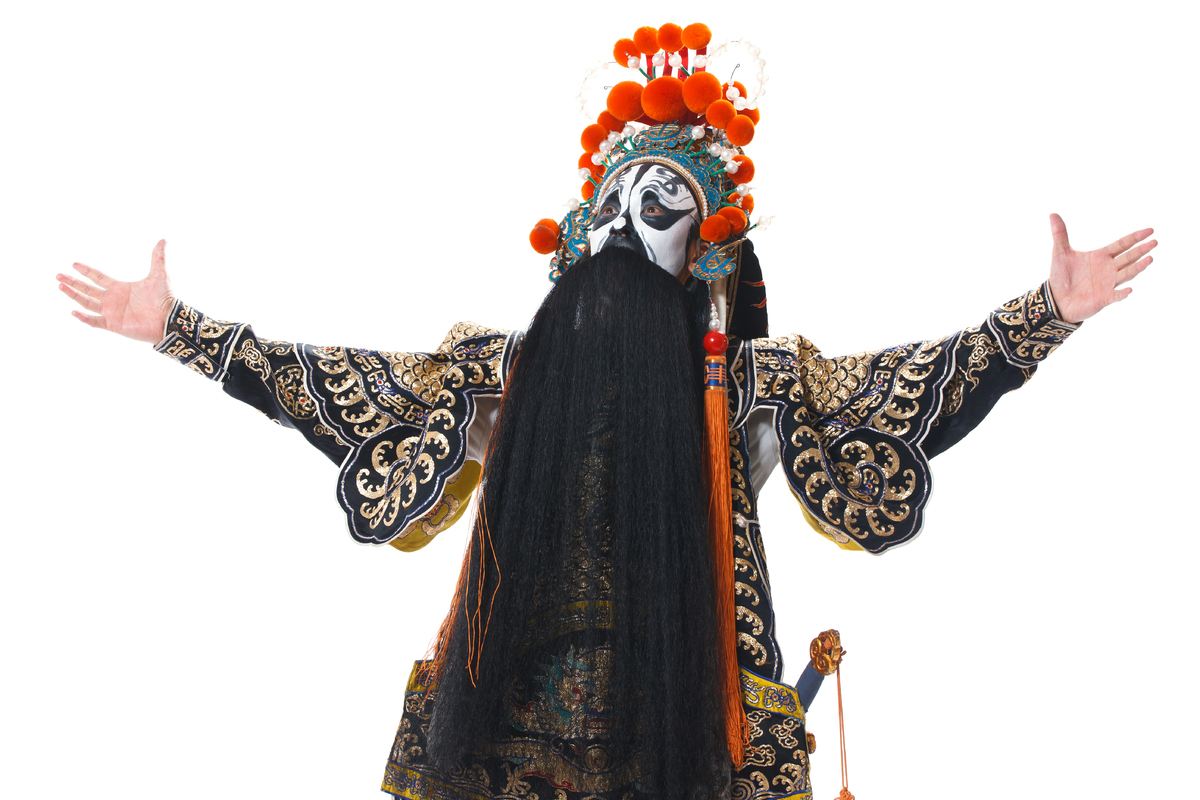 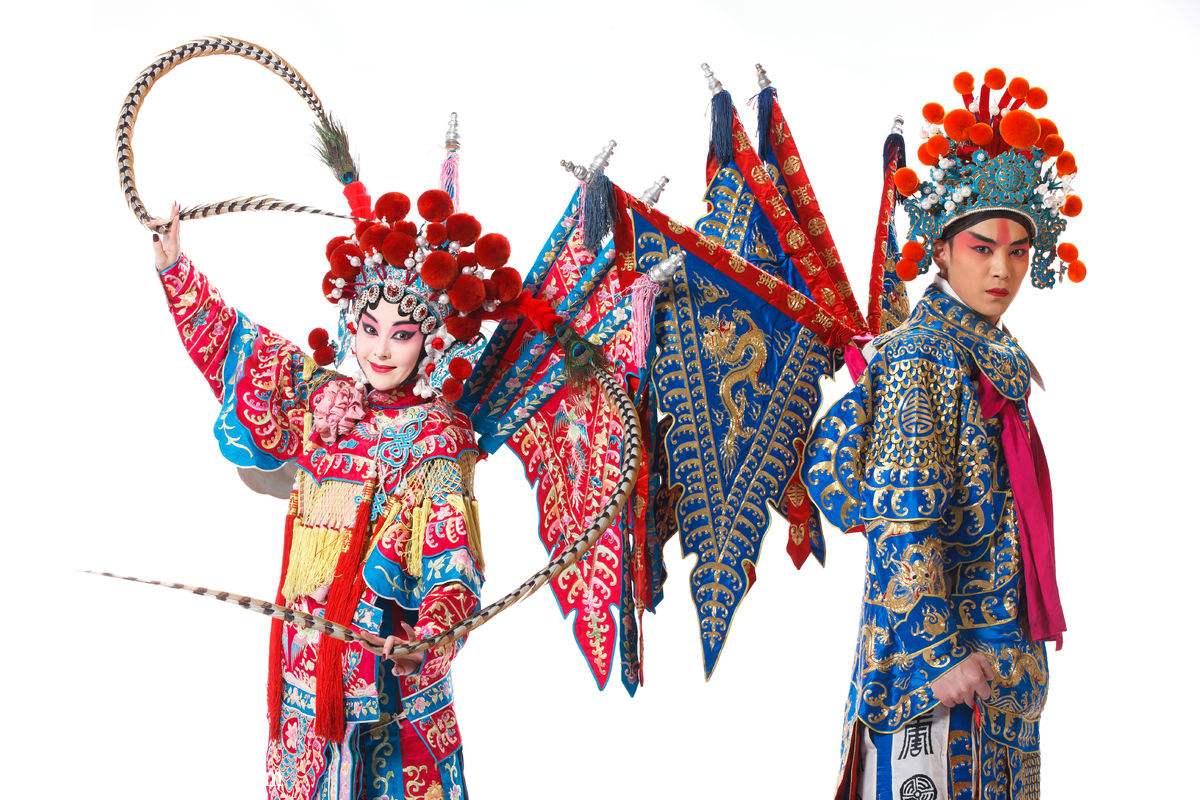