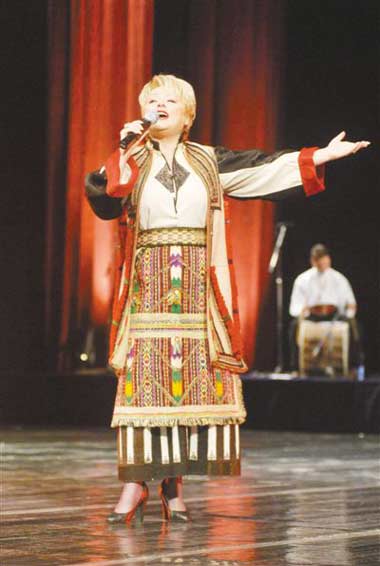 ■Susana Spasvoska is highly praised as the Evergreen Tree singer in North Macedonia. Now she has a new title – the North Macedonian singer who sings Chinese songs.

■When attending a performance, Susana will sing her favorite Chinese songs to audience as long as there is an opportunity. She also trains her students to learn to sing Chinese songs, hoping to spread more Chinese songs in the streets of North Macedonia.

‘Chinese songs are beautiful and full of stories. I want to sing more Chinese songs to the world.’ This is the goal that Susana has been working on in recent years.

‘Thanks for the touch and beauty that Chinese music has brought to me.’

Susana Spasvoska, a 54-year-old soprano singer from North Macedonia, has won numerous awards in North Macedonia and Europe, and is influential in the Balkans regions, Australia and Canada.

‘My story with Chinese songs begins with learning Chinese.” In 2013, the Confucius Institute at Ss. Cyril and Methodius University in North Macedonia was established. Due to the interest in Chinese culture, Susana became the first group of students to study Chinese. ’Learning Chinese open the gate of East for me and help me understand China.’ Susana also has a beautiful Chinese name – Sulan.

‘Knowing that I am a singer, my Chinese teacher introduced me to the Chinese national anthem The March of the Volunteers. Its impassioned melody and inspiring lyrics make people can’t be calm after listening to it.’ Susana said, ‘Good songs can stimulate the common emotions of human beings, and people can’t help but learn and imitate.’ Soon, Susana learned to sing the Chinese national anthem.

In the Chinese class, Susana is one of the older students but also one of the most outstanding students. ‘It is not an easy task to learn to sing Chinese songs. Every time I first need to understand the meaning of the lyrics and the background of the song. Only by understanding the content of a song can I interpret the feelings of this song. ’

‘I feel deeply honored to be loved by the Chinese audience.’

In March 2016, Susana held her personal 30th anniversary concert at the National Opera and Ballet Theatre in North Macedonia. At the climax of her concert, the Chinese song she sang surprised the audience. Susana still remembers the scene at the time. Before singing the first Chinese song Jasmine at stage, I felt insecure because it was the first time for most of the audience to hear a Chinese song that was sung by a North Macedonia singer. But when the melody began, when I sang, the theater was filled with warm applause. The audience was immersed in the wonderful mood created by this song. They felt both curious and satisfied which makes me so happy. People from North Macedonian like Chinese music!

‘Traditional instrumental music plus ethnic rhythm, coupled with story lyrics, is fascinating.’ At the two concerts, Susana sang several Chinese songs, which brought a feast for the ear. ‘I still remember that after the concert, an audience commented on my social account, ‘The Chinese song you sang is great. I have never heard such wonderful music before, as if I was brought into a dream.’ Susana’s clear and accurate pronunciation also made the Chinese audience full of praise.

In 2017, Susana participated as a special guest at the China-Central and Eastern European Countries Cultural and Art Carnival held at Beijing Garden Expo. ‘The activity is very lively! I still remember that after I sang 3 Chinese songs in Chinese, the audience was boiling. I feel deeply honored to be loved by the Chinese audience.’

‘A few years ago, China was remote and strange to the people from North Macedonia. Many local people, through the Chinese songs sung by Susana, became interested in Chinese culture and began to understand China.’ Arica, an interpreter, who is a fan of Susana, and she is also a fan of Chinese music influenced by Susana.

‘Our country is at an important position along the Belt and Road and is also an important node for East-West exchange. Over the years, more and more Chinese companies have come to us, not only to build highways, but also to bring advanced technology and management philosophy.’ Susana said that in the process, more and more people from the North Macedonia are eager to understand China. The two countries have had a profound friendship since ancient times. She is willing to serve as a cultural messenger to let people from two countries appreciate each other and enhance mutual understanding. ‘I believe that there will be more mutually beneficial and win-win cooperation in the two countries in the future, and the exchanges and communication will be smoother and closer.’

‘Chinese songs have brought the hearts of China and the people of the world closer.’

Susana’s mobile phone screen image is a big Chinese character – ‘love’. ‘This is a Chinese character that I really like, full of tolerance and temperature. It is like my favorite song Ao Bao Meet. The girl and the boy tell they love each other. The songs are filled with beautiful artistic conception, which reminds me of a famous sentence of Ouyang Xiu, who is an ancient Chinese poet, ‘The moon is on the tip of the willow, the people are about after dusk.’ Chinese music reflects the profound Chinese culture and should be shared with people all over the world.’

‘The rapid development of China’s economy is obvious to all over the world. Similarly, more and more excellent songs are coming out. Although I am very busy at work, I will learn to sing new Chinese songs whenever I have time.’

‘Every time I go to China, I see tremendous changes. This is a country that is developing at a high speed, not only in economics, but also in the creation and prosperity of spiritual culture. China is an amazing country.’ Susana said that she is learning to sing Kangding Love Song and looks forward open a concert in China.